skip to main | skip to sidebar

'Reset': It's the End of the World as We've Known It. Now Start Over. 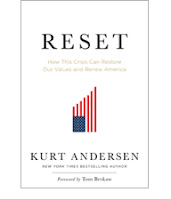 It's a slim volume, but stuffed with original and provocative ideas -- you'll spend as much time ruminating about each page as reading it.

It asks: What succeeds the wretched age of excess that defined the past quarter century (starting with Reagan, and ending last year)?

Now that the unthinkable has happened -- the bubble has burst, the economy is in the toilet, our careers and lives have been irreversibly disrupted and derailed -- what's next?

Andersen's title reflects his optimism that, instead of picking up the pieces and trying to restore what we once had -- which arguably was "too much" and ultimately unsustainable -- we will get back to our roots, so to speak, and rethink things from the ground up.

We'll refocus on our needs, not just our wants.

And we should look at the economic meltdown as an opportunity not to get back on track, but to create a new and improved track.

"Necessity," he writes, "is the mother of re-invention."

For journalists (and photojournalists and videojournalists), that means creatively re-positioning yourself and your talents, and finding a way to make a living that does not rely on dying institutions such as newspapers and magazines and TV news.

Time Magazine, which calls Andersen the "poet laureate of the recession," devoted a weeklong blog to his book.

And it excerpted four meaty chunks of the book itself:

Is China the New Us? Or Are We?

Immigration: Let's Get Over It Already